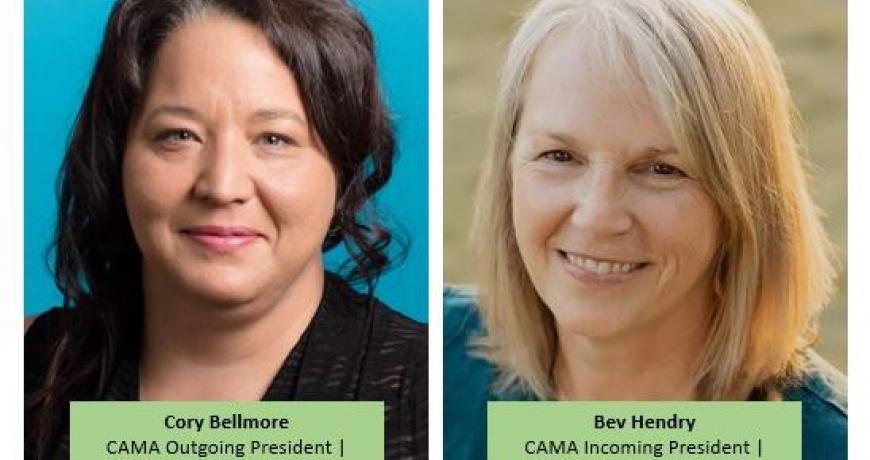 Fredericton, NB (November 28, 2022) – Best wishes to Cory Bellmore, Chief Administrative Officer for the City of Dawson, YT, and current President of the Canadian Association of Municipal Administrators (CAMA) who will be stepping down from her duties as Chief Administrative Officer for the City of Dawson at the end of December 2022.  She will also be resigning from her role as CAMA President.  She will begin a new position as the Director of Finance for Little Salmon Carmacks First Nation in the Village of Carmacks, YT early in the new year.  The move will bring her closer to family.

Congratulations to Bev Hendry, CAMA’s First Vice-President, who will assume the position of President on January 1, 2023.  Hendry is the Chief Administrative Officer for the Township of West Lincoln, the largest municipality geographically in the Niagara Region, ON.  She will finish out Bellmore’s term, which runs until the Association’s Annual General Meeting on May 30, 2023.  At that time, she will continue as CAMA President for the 2023-2024 Board term, as was the original plan.

“I am very proud to have represented the CAO profession across Canada, and especially in the northern part of the country, by serving on the CAMA Board for the past five years and as President for the past six months,” said Bellmore. “Being a member of CAMA and on the Board has been a highlight in my municipal career.  This organization does amazing work for the profession, and the networking and interactions are so crucial for CAO’s to succeed in our communities.”

“I know I speak on behalf of the Board when I say that we have appreciated Cory’s dedication to the municipal profession, and we wish her well as she starts her new chapter that brings her closer to her family in Carmacks.  Moving forward, I am very excited to become the next President and to continue the great work taking place under Cory’s leadership,” said Hendry.

Hendry was elected to the CAMA Board in 2017 as the Member-At-Large for Municipalities with a Population Under 100,000.  She became Treasurer in 2020, Second Vice-President in 2021, and First Vice-President in 2022.  She is currently a member of CAMA’s Communications Committee, Chair of the Strong Mayor’s Taskforce, and was the Chair of CAMA’s Political Acumen Toolkit Committee and a member of the Human Resources Toolkit Committee over the past five years.  Hendry is also a Past President of the Ontario Municipal Administrators Association.

Hendry has dedicated her entire 35-plus year career to the local government sector, starting as a student with a number of roles at the City of St. Catharines.  She began her full-time career with the Province of Ontario, spending the majority of her 19-years working with the Ministry of Municipal Affairs and Housing, and finishing her time there as Regional Director for Central Ontario.  She gained valuable experience in policy development, program administration, strategic planning, stakeholder and government relations, provincial planning, communications, and issues management.  She holds a Bachelor of Applied Science and a Master of Science in Management and Economics from the University of Guelph and a Masters Certificate in Municipal Leadership from the Schulich School of Business, York University.

Hendry is a strong leader and community builder, with a focus on good governance.  Since 2005, she has held the top civil servant position at the Township of Scugog, the City of Oshawa and has been with the Township of West Lincoln since 2018.  In these roles, she has spearheaded advancements in modernizing service to residents and businesses, developing inclusive communications for increased public engagement, implementing new financial strategies and comprehensive growth plans with all stakeholders and has fostered an environment of cooperation that can be held to increased standards of accountability and transparency.  She has a high level of integrity and trust and is committed to the Municipal CAO profession.

The revised members of the 2022-2023 CAMA Board of Directors are as follows with the position of First Vice-President and the CAMA Representative for Northwest Territories, Yukon Territory, and Nunavut remaining vacant until the 2023 election: