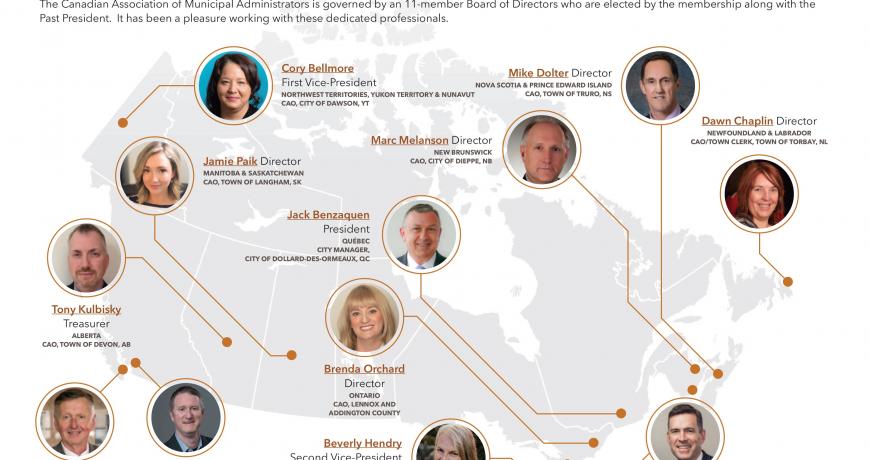 Fredericton, NB (May 31, 2022) – Cory Bellmore, Chief Administrative Officer for the City of Dawson, YT was elected President of the Canadian Association of Municipal Administrators (CAMA) during the association’s annual general meeting held virtually on May 31, 2022.

She is the CAMA Representative for the Northwest Territories, Yukon Territory and Nunavut and becomes the association’s first-ever First Nations president.

“I am very proud to represent the CAO profession across Canada, and especially in the northern part of the country, by serving as the CAMA National Board president,” said Bellmore. “During my term, I look forward to continuing with the direction outlined in CAMA’s five-year Strategic Plan. With things settling down from the pandemic, and everybody craving human interaction again, I am especially looking forward to seeing our members in person at our 2023 Annual Conference.”

Bellmore joined the City of Dawson, YT as their Chief Administrative Officer (CAO) in March 2018, after leaving her post as CAO for the Village of Carmacks; a position she had started in 2006. Since 2003, she has served as a director for the Carmacks Development Corporation.

Prior to entering the world of municipal administration, Bellmore served a term on Council for the Village of Carmacks. Her career in public service began shortly after Little Salmon Carmacks First Nations signing of Land Claims and Self Government. As a Director of Finance and Administration for LSCFN, she learned about, and helped build, a local government structure.

She was recognized for her contributions to municipal government in 2009 from the Association of Yukon Communities with the annual Municipal Employee Award of Excellence. She has also represented Yukon communities on the renegotiation and restructuring of the annual territorial grant for municipalities, as well as the review and updating of the Yukon Government Municipal Act.

In 2001, Bellmore received a BComm from the Hayskane School of Business, University of Calgary. She earned an Arts and Science Certificate from Mount Royal College in 1999.

She is a proud citizen of the Little Salmon Carmacks First Nation and belongs to the crow clan (Hanjet). Bellmore and her family love living in the Yukon, learning and teaching traditional culture and values, as well as enjoying the amazing wilderness.